Launched by a gift from J.E. Hanger in memory of Howard R. Thranhardt, CP, the series has become one of the most distinguished honors in the orthotics and prosthetics profession.

Attend the 2015 AOPA National Assembly to see the “best of the best” at the award winning Thranhardt Lecture Series.  This year’s award contenders are outlined below.

Can Individuals with Transtibial Amputation Reduce the Metabolic Demand of Walking Using Real-time Visual Feedback?
Elizabeth Russell Esposito, PhD is a researcher at the Center for the Intrepid at Brooke Army Medical Center.  She specializes in lower extremity bio-mechanics with a focus on prosthetic technology and secondary injury prevention.

Balance-Confidence May Help Explain Physical Function and Community-Integration among Individuals with Unilateral Transfemoral and Transtibial Amputations
Megan Sions, PhD, DPT, PT, OCS specializes in evaluation and treatment of muscle and joint dysfunction and vestibular disorders with special interest in the management of spinal pain and disorders.

Immediate Postoperative Prosthesis, a Comparative Analysis
Art Shea, CPO has 23 years of experience in O&P and has worked with New England O&P Systems for 13 years.  His education includes a BA in physics and a certification in prosthetics from Florida International University in 1992.

Check out the Assembly preliminary program to see the exceptional education schedule you have come to expect from AOPA.  We will see you in San Antonio! 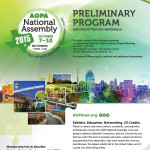