AOPA Statement on Combating Fraud, Waste, and Abuse in the Medicare Program

April 30th, 2014 — The American Orthotic and Prosthetic Association (AOPA) is pleased to provide this statement, which was delivered to the House Ways & Means Subcommittee today, concerning Medicare fraud and the delivery of care to Medicare beneficiaries who have suffered a loss of a limb or impaired use of a limb or the spine. AOPA, founded in 1917, is the largest orthotic and prosthetic trade association with a national membership that draws from all segments of the field of artificial limbs and customized bracing for the benefit of patients who have experienced limb loss or limb impairment resulting from a chronic disease or health condition. Members include patient care facilities, manufacturers and distributors of prostheses, orthoses, and related products, plus educational and research institutions. Annual Medicare spending for custom orthotics and all prosthetics is less than one percent of all Medicare spending.  However, Medicare fraud has an outsized impact on the beneficiaries whose limb loss or impairment results in the need for orthotics or prosthetics.  Patients treated by AOPA’s members already are confronted with the trauma of limb loss or impairment, loss of mobility, diminished independence, and sometimes financial hardship. When seen by a fraudulent supplier, the patient also oftentimes experiences a financial loss after paying for a device that is inappropriate or never delivered.   Additionally, a patient in this situation has to find another supplier and make another copayment, and he or she may lose important time in the rehabilitation process.  Dobson-DaVanzo’s research concluded that nearly one-thirdof the $3.62 billion CMS paid between 2007-2011 for orthotic and prosthetic services for Medicare beneficiaries went to unlicensed providers, as well as those who fail to meet the accreditation requirement legislated by Congress in 2000.  Additional research by Dobson-DaVanzo tracking Medicare data has demonstrated the overall cost-effectiveness of O&P care.  For example, the analytic work indicated that over the first eighteen months patients who receive spinal orthoses had total Medicare episode payments that were 0.3% lower than those who did not receive orthotic bracing for the comparable back ailment.   These are important trends for saving Medicare dollars. AOPA and its members believe the best way to fight fraud in the orthotics and prosthetics sector is to prevent fraud in the first place.  We also believe that it is possible – and preferable – to combat fraud without punishing an entire healthcare sector because of the actions of a handful of bad actors.   Regrettably, it seems that the Centers for Medicare and Medicaid Services (CMS) has opted for the latter approach, despite Congress having given the agency adequate authority to drive fraudulent suppliers from the Medicare program. The Fraud-Fighting Tools CMS Has Not Used Section 427 of the Beneficiary Improvement and Protection Act (BIPA) of 2000 requires CMS to ensure that Medicare payments for custom fabricated orthotics and all prosthetics are furnished by “qualified practitioners” and “qualified suppliers.”  The orthotics and prosthetics profession supported this effort and consistently has pushed to have this requirement implemented.   Currently, 14 states have enacted orthotics and prosthetics licensure statutes.  In 2005, CMS issued Transmittal 656 to Medicare payment contractors specifying that contractors must have claims processing edits in place to make sure that in those states where prosthetics or orthotics must be provided by a licensed or certified orthotist or prosthetist, payments are made only to practitioners and suppliers that meet relevant state orthotics and prosthetics licensure laws.   However, CMS has not taken concrete steps to enforce this requirement.   For example, in 2009, a “60 Minutes” expose demonstrated that CMS was paying unlicensed providers for orthotic and prosthetic services. The amount of Medicare funds inappropriately paid by CMS was in the tens of millions.   The fraud discussed in that report involved Florida, a state with orthotics and prosthetics licensure requirements. Since Congress passed BIPA, AOPA and its members have met with CMS administrators and staff regarding implementation of the law, and in 2007, we were told that proposed regulations would be issued by the end of that year.  We are still waiting.  On June 25, 2013, AOPA shared with CMS the results of two studies that demonstrate that CMS had been paying unlicensed suppliers.

In a letter to AOPA dated August 2, 2013, CMS Administrator Marilyn Tavenner denied that CMS has been paying unlicensed orthotics and prosthetics suppliers.  In the letter, Administrator Tavenner states that systematic claims edits have been in place since 2005 to deny claims submitted by unlicensed suppliers in nine states with orthotics and prosthetics licensure requirements (AL, FL, IL, NJ, OH, OK, RI, TX, and WA) and that the agency is implementing claims edits for the remaining five states with licensure requirements (AR, GA, KY, MS and TN). (This was reported in a Medicare Learning Network Matters article on the same day.) This amounts to an admission by the agency that it has been paying unlicensed suppliers in at least five licensure states (and CMS has omitted any reference to Pennsylvania and Iowa, both of which have enacted O&P licensure as well).  Also, the effectiveness of the claims edits in the other nine states is questionable, in light of the fraud that has been documented in two of these states (FL and TX) since 2005 when these edits reportedly were implemented. It is difficult to understand how the relative proportion of Medicare payments to non-certified orthotics and prosthetics suppliers is unchanged if unlicensed providers no longer are receiving payments in states where certification is required.  We have seen evidence of only a small reduction in the proportion of payments to non-certified orthotics and prosthetics personnel since 2009.  This also is supported by the results of the independent survey of orthotics and prosthetics suppliers, which showed that unlicensed, non-certified suppliers continue to provide and be paid for orthotics and prosthetics furnished to Medicare beneficiaries, even in states where licensure is required. H. R. 3112, the Medicare Orthotics and Prosthetics Improvement Act, has been introduced in Congress and would build upon the fraud-fighting provisions included in BIPA. It would help reduce fraud, protect patients, and save Medicare funds by keeping out fraudulent providers in the first place.  As the Dobson-DaVanzo report notes:  “If CMS was to actively enforce that unlicensed providers cannot receive payment for providing orthotics and prosthetics services to Medicare beneficiaries within a licensure state, Medicare savings could be realized. Under such enforcement of limiting payments to providers with proven licensure and standards of training and experience, payments to unqualified providers would be eliminated. As the ‘60 Minutes’ special suggested, allowing non-certified personnel to provide these services, especially in states with licensure, could lead to fraud and abuse in orthotics and prosthetics services, as well as expose patients who received these services to inappropriate or substandard care. Therefore, shifting payments to only certified providers could result in better care for beneficiaries and lower Medicare payments.”   An estimate of how much could be saved by implementation of these provisions is provided in the following excerpt from a 2009 report prepared by Morrison Informatics. Table 1 – First Year Medicare Savings Estimated Range Following H.R. 2479 (now H.R. 3112) Provisions, with Amendment 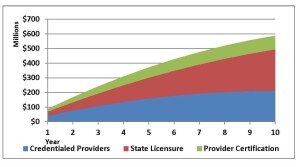