AOPA & Congress Team up to Hold HHS to Task

Below is the text of an email AOPA Executive Director, Tom Fise, JD,  sent to AOPA’s Board of Directors and allied organizations announcing the success of the sign-on letter that obtained the wide support of members of Congress responding to the full court press from AOPA members and the other O&P organizations.

“I am pleased to enclose a copy of the final letter to HHS Secretary Sylvia Burwell, led by Reps. Ryan Costello (R-PA) and Tammy Duckworth (D-IL) and signed by a total of 26 Members of the House of Representatives.  As you can see, the letter: (1) presses HHS/CMS to revise the regulatory definition of off-the-shelf orthotics in 42 C.F.R. § 414.402 to conform with the statutory definition, recognizing the clear meaning and limitation of “minimal self-adjustment” (as previously stated in the prior letter from Senators Grassley and Harkin, October, 2014); (2) modify the OTS list and codes to eliminate from that list any device which does not meet fully and unambiguously the statutory definition of OTS orthotics including “minimal self-adjustment;” and (3) reverse the DME MAC action of August 15, 2014 as inconsistent with the APA and an open rulemaking process, and excise the resulting February 18, 2014 FAQ.

“AOPA launched the efforts targeted at this letter, but we need to say ‘thank you’ to a large number of people for helping to carry the effort forward.  These include: (a) attendees at the 2015 AOPA Policy Forum who personally requested their legislators to send this message [and those who used AOPAVotes (roughly 700 letters) and other vehicles to write this request to their legislators]; (b) our partner organizations in the O&P Alliance and its Counsel, Peter Thomas, who fostered similar strong efforts advocating for the letter; (c) AOPA’s lobbying teams from Alston & Bird and McGuireWoods, and others for relentlessly pushing this message over the past 7 weeks; and (d) Members of Congress and their staffs, and most importantly the staffers of Reps. Costello and Duckworth, who were steadfast in advancing the letter.

“If HHS/CMS takes this message seriously, it would mark both the conclusion to a 15-year struggle to get Medicare to implement and enforce the provisions on licensure and accreditation for O&P that Congress enacted in Section 427 of BIPA 2000, AND reverse Medicare’s misguided effort to expand the relatively narrow category of off-the-shelf orthotics beyond the strict terms of the definition Congress wisely established with the “minimal self-adjustment” criteria, remedying both errant, overly expansive rules CMS promulgated in 2007, as well as CMS’ failure to finish the proposed rule on OTS orthotics that it initiated in July, 2014 and seemingly abandoned in October, 2014.

“So, thanks to all, and we will keep everyone posted on feedback as we receive it from CMS and key members of Congress on this issue.” 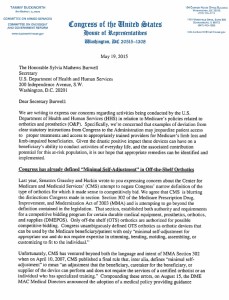