A Legislative win for O&P

The Continuing Resolution/Spending Bill that is moving through Congress to keep the government open has provided the means to accomplish one of the key components of the O&P Medicare Improvements Act, which AOPA, its lobbyists, its members, and MANY important friends in O&P have been fighting for several years!

The legislation set to be enacted by the Senate, moving back to the House, states:
Your orthotist/prosthetist notes WILL be considered by CMS to be officially part of the patient’s medical record for purposes of medical necessity, and RAC and pre-payment audits!

Are we certain? There is no certainty until the Senate and House enacts the bill and the President signs it, however, we are in the strongest position ever to believe that this measure, so important to O&P patients and professionals will make its way into law. All of these three steps need to happen before midnight tonight to avoid another government shutdown — and we fully expect all three will happen.

This provision is NOT the entire Medicare O&P Improvements bill (S.1991/HR2599). In fact the provision is so short that it follows. All these items not enacted are important and valuable provisions, and AOPA, with others will consider the strategy how these might also move forward for the Policy Forum on March 7-8 in Washington.

SEC. 50402. ORTHOTIST’S AND PROSTHETIST’S CLINICAL NOTES AS PART OF THE PATIENT’S MEDICAL RECORD. Section 1834(h) of the Social Security Act (42 U.S.C. 1395m(h)) is amended by adding at the end the following new paragraph:
”(5) DOCUMENTATION CREATED BY ORTHOTISTS AND PROSTHETISTS.-For purposes of determining the reasonableness and medical necessity of orthotics and prosthetics, documentation created by an orthotist or prosthetist shall be considered part of the individual’s medical record to support documentation created by eligible professionals described in section 1848(k)(3)(B).”.

When It Comes to Celebrating….

In a process that took these several years, it is hopeless to think that we can ever identify everyone, and not miss some important contribution. So, knowing that some are being left out, here are some folks we cannot omit from recognition: 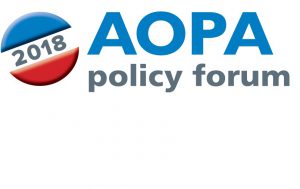 Join us at the 2018 Policy Forum to advocate for the other provisions of the Medicare O&P Improvement Act, Veterans’ choice, and more. Learn more and register.