“AOPA is thrilled to be able to improve the current level of original orthotics and prosthetics evidence-based or outcomes research by providing funding through COPL,” said Eve Lee, MBA, CAE, Executive Director of AOPA. “This year showed incredible growth in COPL Pilot Grant Program submissions. The number of submissions grew by 75 percent and in turn, the number of proposals recommended for funding by the COPL Board and reviewers tripled. In the end, eighteen proposals were recommended by at least one reviewer, but of those, 12 clearly stood out.”

In order to fund the 12 projects, the COPL Board asked AOPA to pursue additional funding, equaling $239,537.50. AOPA allocated $95,000 for the 2021 COPL cycle and received key sponsorship dollars from the American Board for Certification (ABC), the Brown Foundation, and the Board of Certification (BOC). 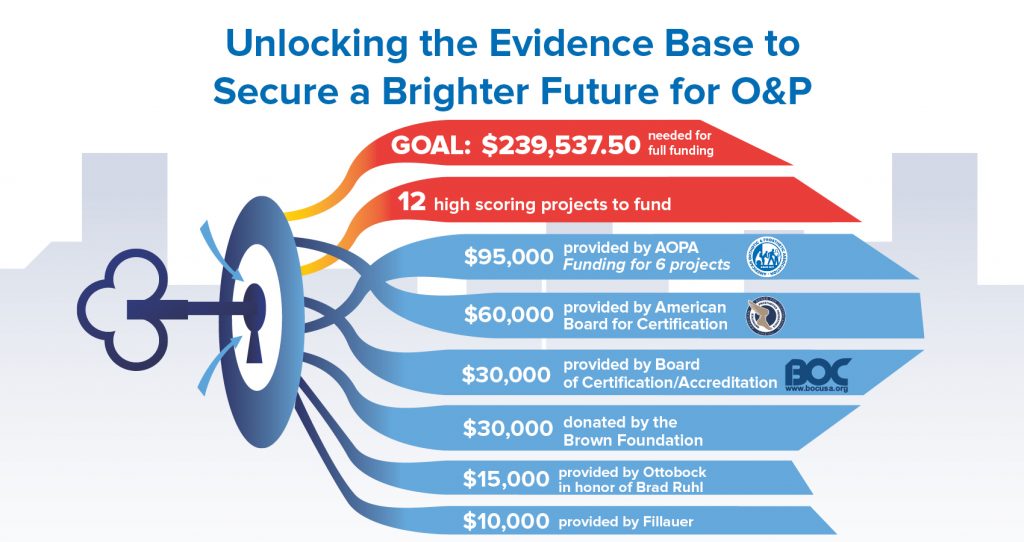 “ABC is pleased to support the Center in its mission to promote research and education in O&P. We are especially hopeful that the evidence-based and patient-oriented research will lead to improved patient outcomes. The alignment of ABC’s and the Center’s missions and goals for the profession couldn’t be clearer,” said Anthony C. Ward, CPO, ABC President

“BOC is proud to be a key funder for the 2021 COPL Pilot Grant Program Cycle. We will sponsor a study titled, ‘Racial Bias in Orthotics and Prosthetics,’ which aligns with BOC’s values and is important to our professional community,” said Bradley “Brad” Watson, BOCO, BOCP, LPO, BOC Board Chair

Since its inception in 2009, COPL has awarded funds totaling 2.5 million for O&P research. COPL was founded to support research objectives which include advancement of knowledge and technologies in orthotics and prosthetics, enhancement of evidence-based medicine research capabilities, and patient-oriented outcomes designed to ensure that the needs of patients are best served.

About the American Orthotic and Prosthetic Association (AOPA): Through advocacy, research, and education, AOPA improves patient access to quality orthotic and prosthetic care. AOPA, based in Alexandria, VA, is the largest non-profit organization consisting of more than 2,000 O&P patient care facilities and suppliers, dedicated to helping O&P businesses and professionals navigate the multitude of issues surrounding the delivery of quality patient care.